You know that church that’s seemingly in crisis and turmoil? Well, today it’ll carry on praying, worshipping, visiting the ill and bereaved, loving one another… (and re-stocking food-banks). And it’ll be doing it all very calmly. It was one vote on one report on a specific question of sexuality: anybody would think the Archbishop of Canterbury had just crossed the Tiber. Honestly, there is no crisis and no turmoil. The majority of the General Synod actually voted by to “take note” of the Bishops’ report on marriage and same-sex relationships by 242 votes to 184 (with six abstentions). But there had been a formal request to vote by synodical houses – Bishops, Clergy and Laity – which required a simple majority in each house. The report failed to obtain a simple majority in the House of Clergy.

The House of Bishops voted 43 in favour and 1 against (this was a mistake by the Bishop of Coventry) .

The House of Clergy voted 93 in favour and 100 against with 2 abstentions (we don’t know how many mistakes).

The House of Laity voted 106 in favour and 83 against with 4 abstentions.

So the Clergy had no confidence in their Bishops.

With the “take note” motion rejected, the Bishops will reflect (again) on the diversity and strength of views expressed (again), and then decide (again) the best way to proceed. Responding to the vote, the Rt Rev’d Graham James, Bishop of Norwich said: “I can guarantee that the House of Bishops will consider carefully and prayerfully all the contributions made in the debate today. When reports come to the General Synod they often come at the end of a process and contain recommendations. This wasn’t that sort of report. The Bishops came to this debate committed to listen. Our report did not bring proposals, it brought a framework and a request for Synod to tell us what they thought. We have listened to those who have spoken, and those others who have made contributions to us directly. Our ongoing discussions will be informed by what members of Synod and the wider church have said as a result of this report.”

Introducing the debate on behalf of the House of Bishops, Bishop Graham said that the report did not make formal proposals but was rather suggesting frameworks where areas needed attention: “The point of a ‘take note’ debate is that it enables other voices to be heard, including those who believe the framework for further consideration is mistaken or wrongly constructed and needs modification. It is not a vote for approval but an invitation to comment and engage, and the House is listening.”

Setting out the difficulties facing both the House of Bishops and the wider Church in considering the report, he added: “There is no simple and easy answer to this issue beyond committing ourselves to engagement with each other when the views on what we should do are profoundly contested.”

The bizarre thing is that certain activists are trumpeting this as some sort of victory for progressive LGBT equality. It really is nothing of the sort. The report was simply a statement of where the Bishops are at on this matter: this report was the very means by which progress (however framed) could have been made. It was a step, a rung, a furtherance of the argument. The vote not to “take note” means that it dies: it cannot now be brought back to Synod, and so those who agitate for full inclusion and marriage equality will now have to wait (years?) for another report.

The point was articulated by the Rt Rev’d Pete Broadbent, Bishop of Willesden: “As I said at the launch of the Report such a debate is on a neutral motion. It allows Synod to discuss the content and recommendations contained in the report. The Synod has declined to take note and so the report in its present form cannot come back to Synod for discussion, though we will still have to find a way forward for the wider discussion.

“We will find this debate a continuing source of disagreement because we haven’t coalesced around an end point. When we legislated for women to be bishops, even those opposed came to the view that the Church of England had to make it possible for women to be bishops in the Church of God according to our canons and formularies. In this debate, we haven’t even begun to find a place where we can coalesce. The Bishops’ Report acknowledges a place of starting. More conversation is needed. We don’t yet know the next stage – nor yet when and whether we can bring any further report to Synod.”

Note the “whether”. The liberal wing of the Church of England might just have made it much harder to secure its ultimate inclusion.

In response to the vote, the Archbishop of Canterbury issued a brief statement, which included this:

To deal with that disagreement, to find ways forward, we need a radical new Christian inclusion in the Church. This must be founded in scripture, in reason, in tradition, in theology; it must be based on good, healthy, flourishing relationships, and in a proper 21st century understanding of being human and of being sexual.

What is a “radical new Christian inclusion” in the area of marriage and sexuality? How does it differ from the old model(s) of inclusion advanced by the world? The Archbishop clings to the Anglican formula, “in scripture, in reason, in tradition”, which were the very components which informed the theology of the rejected report. So what now might change? And when?

Or is it whether?

If the Church is defined by its adherence to Christ, there are necessary limits to inclusion, for there are those who follow false christs, false gods, anti-christs and heresies, by which idolatry and dogma they exclude themselves from Christian fellowship. It may be a tautology, but disciples of Christ must be disciplined: there must be rules which govern membership of the Anglican communion, and so there must be beliefs, professions and actions which are forbidden – ‘red lines’, if you will; the crossing of which demands exclusion, which some might term excommunication.

Now, the severity of the penalty is for the judgment of spiritual leadership – the Bishops. The history of all denominations of the Church is strewn with examples of ‘tough love’ meted out to recalcitrants and recidivists who hardened their hearts to grace and turned their minds from truth. But what does discipline mean in a (post)modern liberal age where ‘inclusion’ has become the touchstone of common civility? If we are to be friends with all and the enemy of none (ie ‘tolerant’; no ‘hate’), then formalism and spiritual rigour must give way to ever-expanding freedom and humanism.

Of course, the way must not be narrower than Jesus made it. And yet he made it narrow: there is salvation and damnation; heaven and hell; sheep and goats. Should the “radical new Christian inclusion” extend to damnation, hell and goats? What is to be the threshold of tolerance? In the pursuit of a “proper 21st century understanding of being human and of being sexual”, dare one begin with a 16th-century Cranmerian formulary? 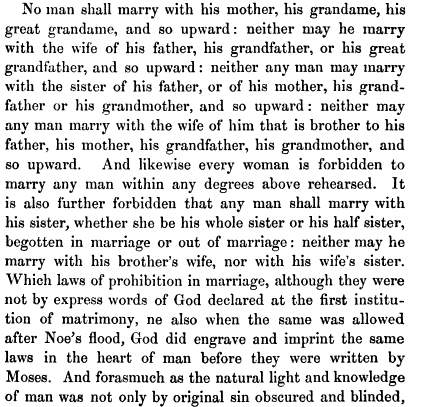 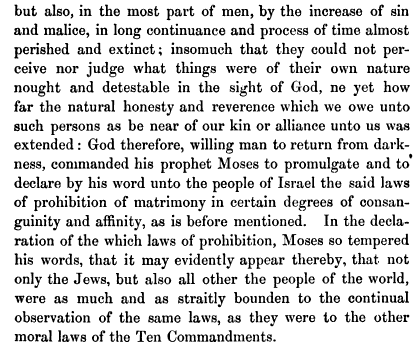 When marriage ceases to be about the sacramental conjunction of a man and woman, knitted, united, and made one flesh and one body, not only for mutual aid and comfort but also procreation – the preservation and continuance of mankind – why does it not then become an institution for the inclusion of all consanguinity and any affinity; all fraternity and sorority without discrimination? If God is love, and marriage is simply the celebration of His gift of love, why should two brothers or two sisters not marry? Why should a son not marry his mother, or the daughter her father? Why, indeed, may the father not marry his son? Why, indeed, might a man not marry his girlfriend and his best man-friend, for does not this fixation with couples discriminate against the bisexual?

A “radical new Christian inclusion” must necessarily be Christian, which is already the most radical inclusion, for the way of salvation is open to all. But on the theology of marriage, there really is nothing new under the sun.