“If I was a Northern Ireland MLA I’d vote for equal marriage, just as I did in Westminster,” tweeted former LibDem leader and committed Christian Tim Farron. “But I support devolution and don’t believe I have the right to impose my view on a devolved matter on one of our nations. I respect colleagues who took a different view.”

“This is mealy mouthed bollocks,” responded LBC broadcaster Iain Dale, a little tersely. “There is no devolved government in NI and hasn’t been for a long time. Why should you seek to deny gay people, or women wanting an abortion, in NI the right to enjoy the same civil rights as I do in England. We are one United Kingdom.”

“I’m not sure I agree with this Iain,” replied Conservative MP Conor Burns. “These matters are devolved. And the talks to get the devolved Govt in NI are at a sensitive stage. That’s why I sat out both votes. It wasn’t the issues but the principle that Parliament devolved them. This isn’t a clear black or white issue.”

“Well you shouldn’t have,” slapped back Iain Dale. “A deadline was given. If devolved govt returns by then, it’s not an issue, but it’s been more than two years now. In the end it’s about basic human rights and if the NI Assembly won’t make a decision then the UK Parliament is entirely within its rights to.”

“Then the Government should introduce direct rule and Westminster can legislate on Northern Ireland as it sees fit,” reasoned Conor Burns. “Until that happens the process of devolution should be respected.”

“So here’s a question for Conor and Iain,” interjected someone called Adam Crossfire. “How long do we wait to have a functioning devolved government so they can make sensible decisions like this? A year? 2?? 10??? Meanwhile those who it affects have their lives put on hold because of pettiness.”

“Those are matters for Government Ministers of whom I am not one. Westminster can legislate as it wishes but that would override devolution,” Conor Burns replied, calmly and courteously. “Try selling that in Scotland.”

Iain Dale responded no further, though the Twitter hordes descended where they needed to in order to ensure that their voices were heard in defence of his demand for the “basic human rights” of abortion and same-sex marriage, and the liberation of all the people of Northern Ireland from the bigotry of protection of the unborn and the traditional understanding of marriage. 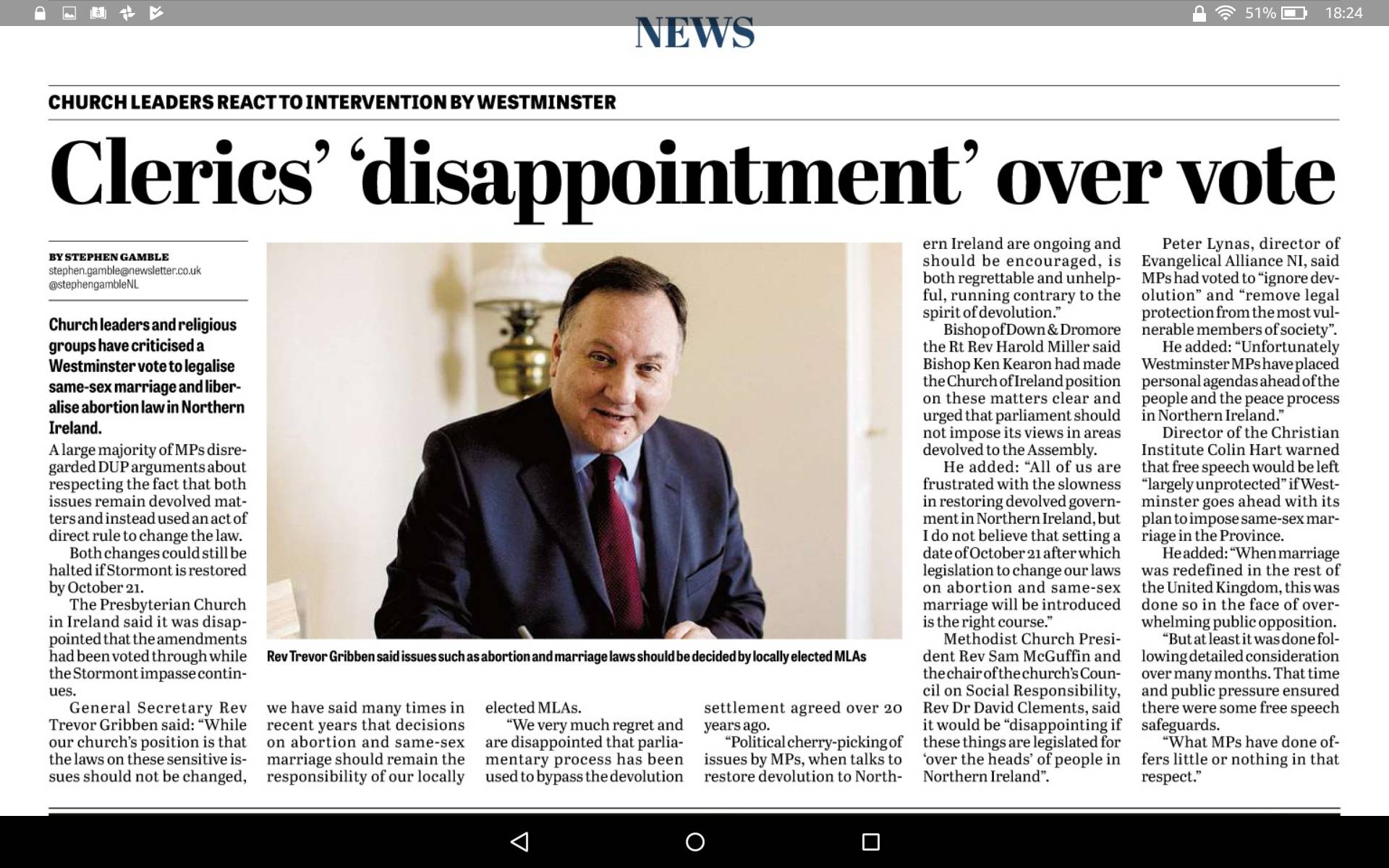 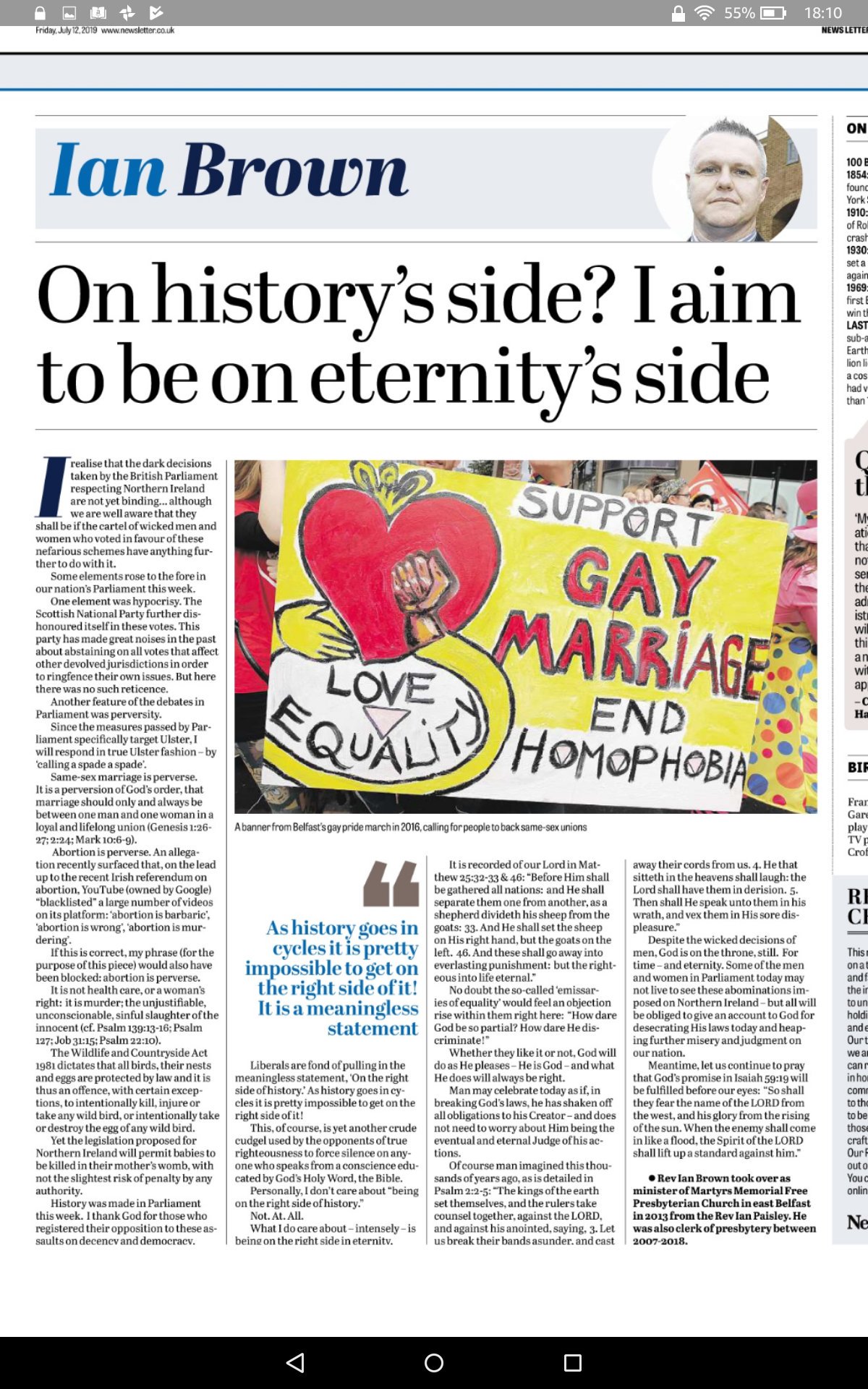 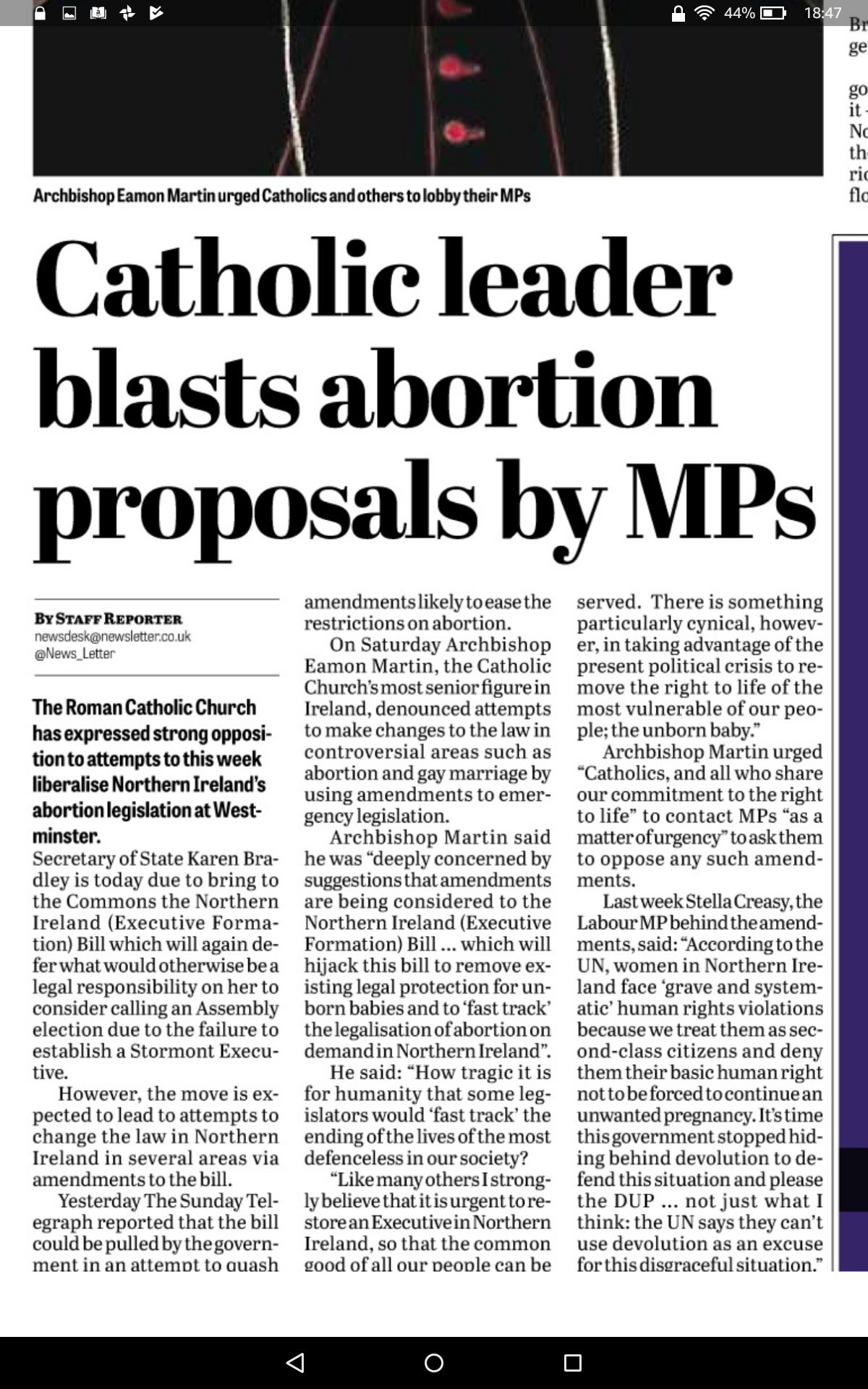 And so we come to a moral-political dilemma: one group demands the same liberation in Northern Ireland as enjoyed by their compatriots in the rest of the United Kingdom; and another group demands freedom from the imposition of that liberation. The civil-rights progressives demand positive liberty – freedom to marry someone of the same sex and to terminate babies in the womb; and the democratic conservatives demand negative liberty – freedom from the imposition of laws which remove the right to life of the unborn and defend the orthodox view of marriage.

What a lot of silliness this is.

Anyone with the money can cross the Irish Sea and get an abortion in Dumfries or Gwent; and any same-sex couple with a bit more money can fly to London and get married and then live happily ever after back in Londonderry – as civil partners in the state’s eyes, but married in their hearts (if not in the sight of God, as they may believe). So the wealthy have their abortion civil rights, and the wealthier (who are prepared to tolerate a little local definitial latitude) have their same-sex marriage civil rights.

But the poor who cannot afford to travel to Dumfries or Gwent or London are forced to endure unwanted pregnancies and remain unmarried.

When it comes to human dignity and religion, to civil rights and human rights, the inherent tensions and mutual exclusions can be extraordinarily challenging, but wouldn’t it all be a little easier if claims and counter-claims, and convictions and counter-convictions, were all expressed with a little more humility and grace, recognising that those with whom we differ are not bigoted monsters or moral perverts, but that each may have serious grounds for their beliefs? That is to say, if the Church sounded more like Christians such as Tim Farron and Conor Burns, and expressed less of the terse belligerence or strident self-righteousness of Iain Dale and Adam Crossfire, it may get more of an ear from those who have ears.

The Church is called to be salt and light, not a sloganeering, insult-hurling society for the perpetually aggrieved. If the Christian community is to edify society by living faithfully under the gospel, it must realise that liberty and autonomy have supplanted moral orthodoxy, and that when post-truth people believe something to be true, it becomes truth. Regardless of what others may think or do, regardless of what the law permits or prohibits, the people who belong to Jesus Christ are called to counsel, support, reconcile and forgive.

Christian opposition to abortion and same-sex marriage has failed because the Church has attempted to meet the moral challenge within the limits of public polity, in the case of Northern Ireland looking to Stormont to sustain the moral law, and now praying that the devolved Assembly will be back up and running before Westminster’s new Bill becomes an Act of Parliament so that MLAs might redeem the situation. The Church has consistently failed to exhibit its deepest convictions that make the rejection of abortion intelligible, and the repudiation of same-sex marriage compassionate or loving. When you proclaim your gospel in Greek, you shouldn’t be surprised that Hebrews don’t have a clue what you’re talking about.